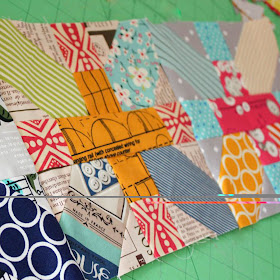 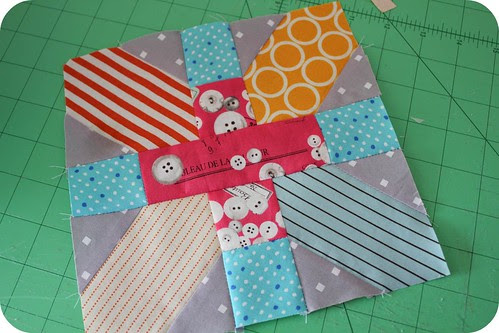 I joined another quilt bee, but my month isn't until September. I've decided ahead of time that I'm going to ask for blocks like the Setsuko Inagawa quilt from this year's Tokyo Quilt Festival. Jan was a legend and took all sorts of wonderful photos and closeups of it. It's been the buzz of flickr since January.

Edit: I actively searched for the original source of this block without much luck. Luckily the internet is full of helpful people. Thanks to Amy, I now know this block is attributed to Nancy Cabot, 1938 Source: Barbara Brackman's Encyclopedia of Pieced Quilt Patterns.

I couldn't find the pattern in any of our Japanese quilt books, so I decided to reverse engineer it. So I futzed in Word and posted some diagrams to flickr for my quilt bee girls. Shortly afterwards, I was inundated with requests for a full tutorial. I was also approached by several girls wanting a sewalong (details at the bottom of this point).

Though my quilt bee month isn't until September, I said I would do a blog post about how I made the blocks. Bear in mind, this is my method. This is not necessarily the one used to create the actual inspiration quilt above and my sizes might vary slightly from the actual quilt. It seems to work well for me.

Also, my test blocks are a bit rough. Corners are missing, threads aren't trimmed. Fabric isn't pressed. For me this is a scrap eating project, not an heirloom. So if my points drift a little or I put a piece of fabric in backwards, I'm not going to beat myself up over it. I want this to be relaxed and fun. 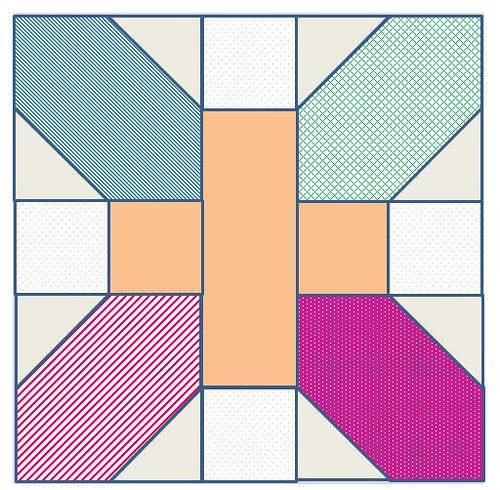 Each block is made up of 7 total fabrics. This quilt is very scrappy, so it does not matter if you choose lights or darks for each area. Just make sure you have 7 total fabrics in a block. 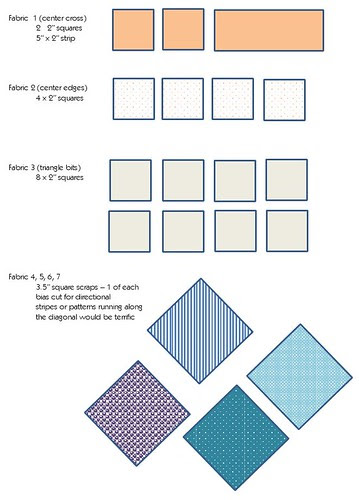 After testing several blocks, I believe at the four fabrics for the x look best when they are cut on point so the print runs along the length of the x. Visually this gives you the strongest impact, but it is more difficult to sew because the fabric can stretch since it's cut diagonal to the grain. You can cut a 3.5" square on point out of a roughly 5" straight square. So if you are scrap gathering, looking for fabrics about this size.

In my example, I choose quite a few stripes in case this wasn't clear. Feel free to fussy cut some fabrics so their design ends up centered on the block. If you look closely, you'll see that the original Japanese design is quite fussy cut. The dots usually align perfectly down the center. There are special pieces. Scrappy or fussy. It's up to you. 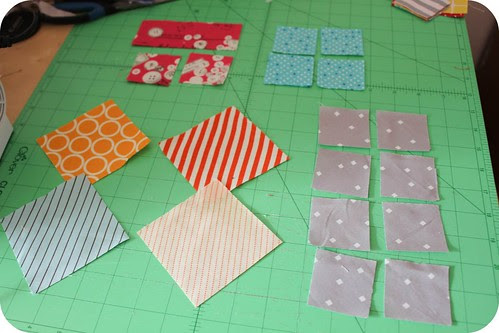 Creating the X branches
If you omitted the center cross and cross edges, you would be left with a traditional quilt block pattern called the Road to Tennessee or Indian Hatchet, depending which source you use. For each block, we create four x branches or corners.

Begin by aligning one 2" background square onto of one 3.5" aligning the corners with right sides facing. Note: the stripes run vertically. This will have the biggest impact visually for your quilt. In the original Japanese quilt, most stripes on the corners run vertically, but there are some exceptions. 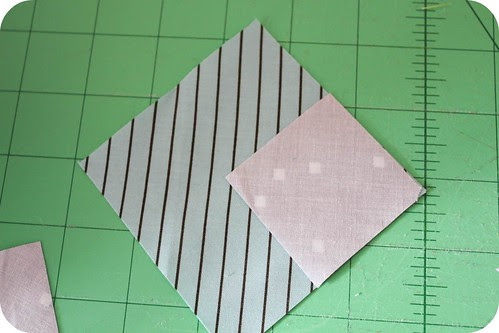 Using a fabric marking pen and straight edge, draw a straight line for corner to corner on your background fabric as shown. 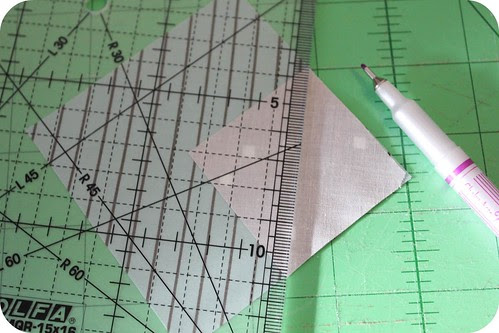 Sew directly on the line you just traced 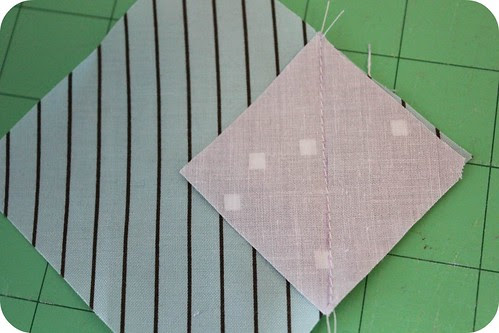 Trim away the outer edge, leaving 1/4" for seam allowance. 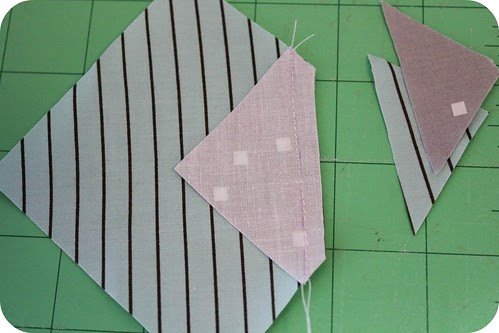 Press open and repeat for the opposite corner 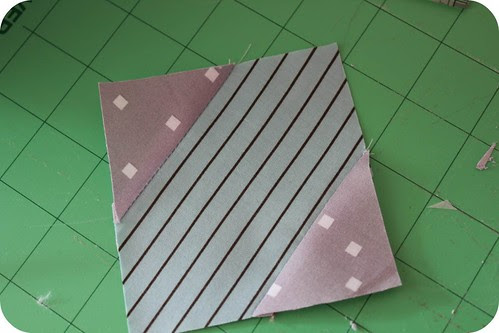 As you can see, even without the center cross, this quilt design has quite an impact. I believe these are called Indian Hatchet or Road to Tennessee blocks and they are traditionally made in the inverse with a common fabric on the X and scrappy fabric in the little triangles. Well-schooled quilters, please feel free to correct me. I'm always happy to learn. 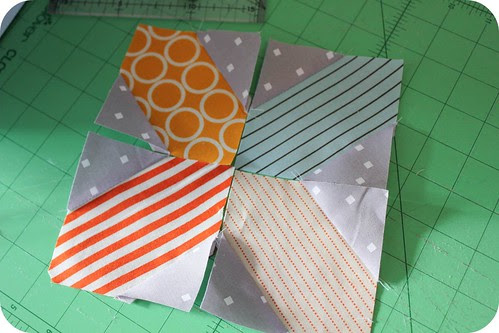 Tip: Making each corner one by one can tedious, so I like to do all of my marking in one step and then chain piece to make the process faster.

I originally drew diagrams in word, but was asked to take pictures of the block making process, so feel free to print them out instead of the full blog post. 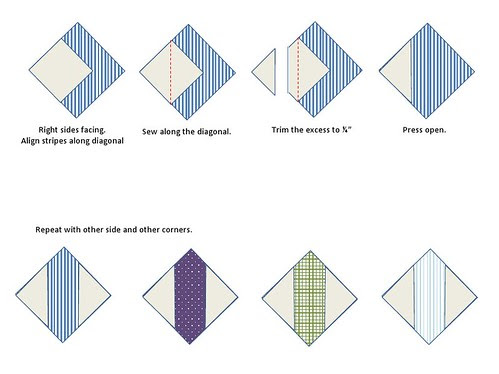 Making the +
Making the + in the center of the x is simply a matter of laying out your fabrics and sewing the pieces together with a 1/4" seam. 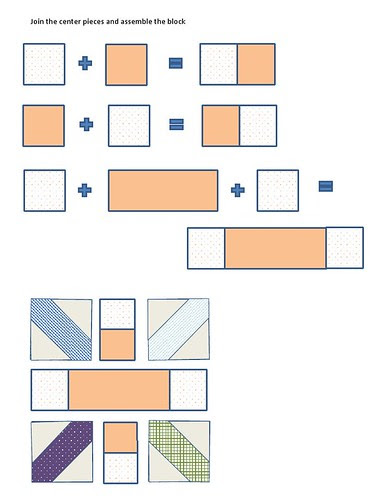 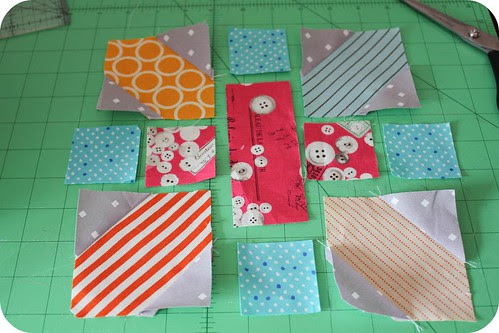 That's it, your first block is done!

I've been doing test blocks, but haven't put much together properly yet. I have until September before I get started in earnest. You can see how it's going to shape up though. I know my blocks look a bit rough. Remember, I'm making something fun for me and not an heirloom. Patchwork doesn't always have to be perfect, but it should always make you happy. 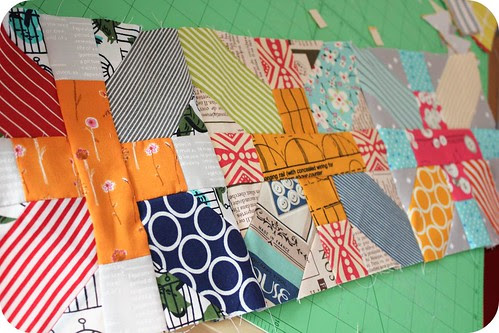 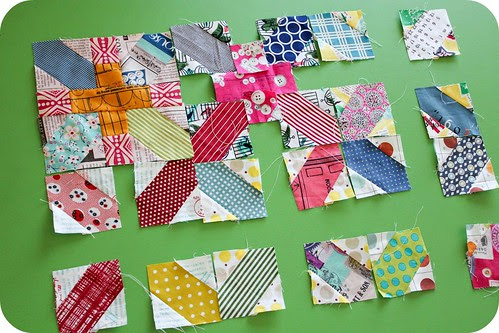 Once again, I think its important to mention that this tutorial is inspired by Setsuko Inawaga's submission to the Tokyo Quilt Festival. If you make one and are assigning credit, it really should go to her. In addition to these blocks, the original quilt has some stunning applique work, test and macarons. I encourage you to run with this idea and make it your own. Also, I am thankful to Jan (Be*Mused) for her love of Japanese fabric and quilting and for sharing years of photography from the Tokyo Quilt Festival.

That's it! If it doesn't make sense or something is unclear, do ask. I'm sure others have the same question. I'll update the tutorial in that case. Or if you have any tips or suggestions, I'm sure the girls will love them. Laura has already started one of the japanese x and + quilt-along groups on Flickr. I believe they are officially kicking off in June. Feel free to join them and discuss colour ideas, share scraps from your bin and get ready!

Edit: answers to great questions -
- What is the final block size? 7.5" finished, 8" including seam allowance
Amy Badskirt at 9:17 AM
Share

You are a rockstar! Thanks so much for your comments!